Laughter is good for the heart urban comedy series

The series will kick off SATURDAY MAY 17TH @ The SandPit Cafe' And Lounge in Massillon, Ohio

THE OFFICIAL COMEDY SERIES HOST IS:

T-ROBE, who is a comedia/actor who is bursting onto the national scene. His loveable personality and laid back persona appeals to all crowds. Audiences easily relate to his real life experiences focusing on friends, family, and everyday life. His orginal tag line "STRAINED UP" is a fan favorite and will keep you laughing long after the show is over.

T-ROBE has performed in Improv Comedy Clubs all across the Country as well as many other comedy club and venues. T-ROBE has opening up for a variety of comedians. He also has had the pleasure of performing private events for The Pittsburgh Stellers & Baltimore Ravens.

T-ROBE has a DVD that was filmed live @ The Improv Comedy Club in Pittsburgh.

This breakout star from Kankakee, IL is bringing a new type of funny to the comedy game. T MURPH rocked out on the 2ND season finale of Comedy Cemtrals Key & Peele and was such a riot that he was able to tour the college circuit with the sketch comedy duo. Traveling the US, T MURPH continues to amp up crowds at universities, military events, private shows and comedy clubs with his observational off the wall authentic brand of comedy.

T MURPH has been selected to perform in the largest festival in the nation, TBS Just for laughs and BET Comic View 2014.

T MURPH has worked with Hannibal Buress, Cocoa Brown from Tyler Perry's "From better or worse TV Show and Steve Byrne of the TBS Show "Sullivan and Son"

J RUSS has toured with Rickey Smile. He also has worked with Joe Torry, Capone Bruce Bruce, Deray Davis, Lil Duval, Arnez J, Rob Stapelton, and Lil Rel just to name a few. He is also is currently traveling through out the US performing stand up comedy. 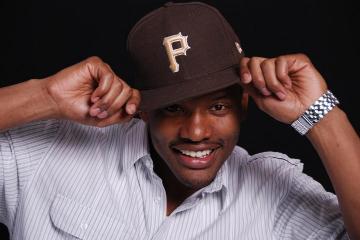