Parade History The Battle of Flowers Parade is the oldest event and largest parade of Fiesta® San Antonio attracting crowds of more than 350,000. It is the only parade in the United States produced entirely by women, all of whom are volunteers. These ladies, dressed on Parade day in yellow and wearing yellow hats, direct operations with the valued assistance of the Texas Army National Guard. In keeping with the original purpose of the Parade, honoring the heroes of the Alamo, participants place a floral tribute on the lawn as they pass in front of the Alamo.

s a vanguard, local and visiting R.O.T.C. units, performing precision drills, entertain the crowds as they eagerly await the start of the Parade. Flag carriers and sirens blaring announce the arrival of the Parade itself. Spectacular, flower-covered floats with participants adorned in colorful costumes, beautiful dresses, and striking uniforms, feature local civic and military groups, businesses and members of the Fiesta royalty. Giant helium balloons, beautifully-decorated, horse-drawn carriages and antique cars, along with uniformed cavalcades performing their routines, thrill the delighted spectators. Interspersed throughout the Parade are military, college, and high school bands from far and near, marching and playing their stirring music to the entertainment of all.

The Battle of Flowers Association builds nine floats each year for the public high school section of the Parade. Each year on a rotating basis, nine schools are invited to participate with their student leaders, band, pep squad, and cheerleaders. Special sections of seating in the Maverick Park Bleachers are available to these schools’ parents and supporters. 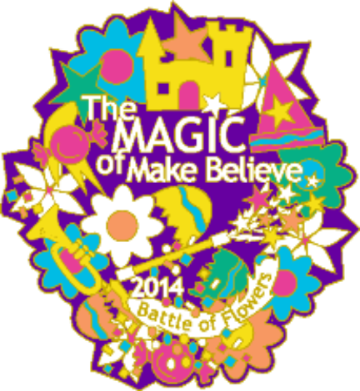